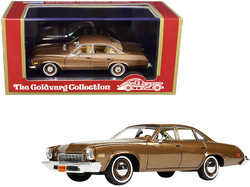 Buick is one of the oldest automobile brands in the world and the oldest in the United States.The first two Buick automobiles were made in 1899 and 1900 at the "Buick Auto-Vim and Power Company" by chief-engineer Walter Marr, but company owner David Dunbar Buick was reluctant to begin making automobiles, being satisfied with stationary and marine engine production, so Marr left Buick in 1901 to found his own automobile company under his own name. His replacement was Eugene Richard, who applied for a patent in 1902 for Marr's valve-in-head (overhead valve) engine, which patent, number 771,095, was awarded to Richard in the name of Buick in 1904. 1940 saw the first use of the "Estate" designation for Buick on the Super station wagon. Due to World War II, automobile production stopped in 1942. 1953 marked Buick's 50th anniversary as well as the introductions of the Buick V8 engine and the Roadmaster Skylark. In 1955, Buick had its best model year sales to date with 738,814 vehicles sold; a record that would hold until 1977. The 1970s saw a number of new models added to the Buick lineup including the Estate Wagon as its own model in 1970, Centurion in 1971, Apollo in 1973, and Skyhawkin 1975. 1975 also saw the first appearance of the "Park Avenue" nameplate for Buick as a trim/option package on the Electra 225 Limited. A Buick Century paced the Indianapolis 500 race not once but twice in the mid 1970s. For 1976, Buick began selling rebadged Isuzu Geminis as Opels to replace the Opel Kadett models it had previously marketed. The following year, Electra 225 and LeSabre were redesigned and downsized and the Buick brand saw its best model year sales to date with 773,313 vehicles sold. 1978 marked Buick's 75th anniversary and welcomed a redesigned Century as well as a redesigned Regal coupe which was now available with a turbocharged V6 engine. Buick model year sales broke another record in 1978 with 795,316 vehicles sold. For 1979, the Riviera was redesigned; Riviera S-Type was named Motor Trend Car of the Year.