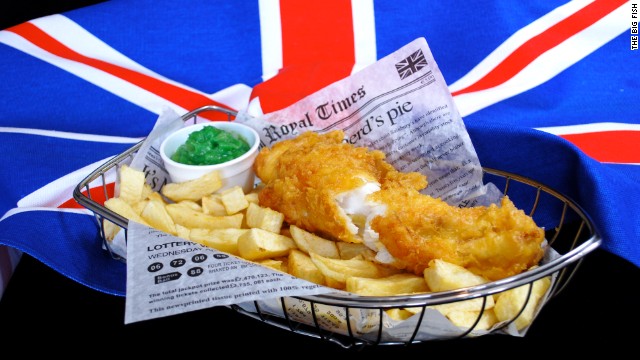 Good day to you all, so many thanks for joining us at BargainBrute.com, America's favorite place to shop online in 2020 once again. For those who have been following this week's short narratives, you undoubtedly know that we have been exploring spices and all that's good with them.

Today once again thanks to our hosts BargainBrute, we are going to take a look at the grand old tradition of eating Fish and Chips, as they should be eaten, in an old sheet of newspaper, and what's more, if we are lucky, we may even discover just why the Brits also did this in the first place, or maybe, on the other hand, we may not; however, I can promise you one thing, you will never again think of Fish and Chips in the same light, ever again.

So, on with our story. Perhaps one of the only things you cannot do in this modern techy world is to purchase "Fish and Chips Online".

Yes as we all know online shopping has come a long way over the past 20 years, but, if we are honest we also know that Britain's favorite food, still has a long journey to go if it stands any chance of catching up with the food our old Gran and Gramps regularly purchased on their way down to the docks in old England Town.

Fish and Chips; Who could have possibly thought of putting a piece of evil-smelling fried fish, dipping it in batter, then, serving it on the same plate with chips. Of course, it may have been one of those strange, but friendly people living over the other side of the pond, "The Brits," who as we know, have been thinking up unusual, but sometimes very successful things to do for 100s of years, and of course "Fish and Chips" heads up that list.

Don't worry friends just having a bit of fun no insult intended. Anyway, if the truth be known, where would the rest of the world be without them.

As in America in the early 19th century, thousands of immigrants flooded into England, bringing with them their favorite meals and recipes. Luckily for most of us at top of that list was our good old friends "Fish and Chips".

This sudden influx of people was of course not confined to America. In fact, it was to become quite soon, the "Great British Take-Away," an industry which would survive two major world wars and keep the mouths of Londoner's fed at the height of wartime rationing, a period I for one, remember well.

Yes, it was a period of intense competition. A period when, in the 1860s, 25,000 Fish and Chip shops emerged out of the London dust with just one mission, to feed what was then, a starving nation. A nation which was still trying to crawl its way back from what was, the most significant man-made economic depression the world had ever seen.

However, although this initial shopping craze would continue for some time, by the end of the 1930s, for reasons unknown, the local fish shop began to increase in size, generating more than 35,000 more, all of which served, what else, yes, you guessed it, those Fish and Chips all sold in beautifully colored News Paper, a tradition still carried out to this day.

During the war, because of rationing (a story perhaps one day we will get into), Fish and Chips became one of the few things not rationed, and as a result, "Fish and Chips that Beautiful British Food," became, at least for most of the working class, their everyday fodder. A fodder which helped turn England into what it is today, a country where if you have the nerve, you could go on and do such things as actually fish, and fish they did, so much so that throughout the nation, men and women from all walks of life, strolled down to the seafronts to partake in what had now become England's third sport, fishing.

As a result, never again, would things be the same. Yes, Britain had come of age, because as we now all know "Fish and Chips that Beautiful British Food," had at last broken through the barriers of snobbery, a class system which had ruled the nation for thousands, or perhaps even millions of years.

So how do you make this classic culinary delight?

First up, place your potatoes into a medium bowl of cold water, then in a separate bowl mix the flour, baking powder, salt, and pepper, before stirring in milk and one egg.

Next, mix the whole lot together until the mixture is smooth, try not to plaster the walls like I usually do, then let it all stand for about 20 minutes.

Next, preheat some oil in a large pot or skillet making sure that it reaches at least 350 degrees.

Next, peel and fry your potatoes in the oil until they are soft and tender, before draining them onto a paper towel.

Next, the fancy bit, dredge the fish in the batter, one piece at a time, then being careful not to burn yourself fry the fish until they are golden brown, before once again draining them onto soft paper towels. There you have it, you on your own, have created that great "Fish and Chips that Beautiful British Food," which has kept England going for all those years, give yourself a well-deserved pat on the back.

Well friends, its that time again. We have come to the end of another short narrative, so all which is left for me to do is to thank, once again both you and of course, out hosts BargainBrute.com, America's favorite place to shop online in 2020 for having me.

So on behalf of the Vandergraph family, and every employee at Bargainbrute.com, together we "Thank you for shopping with us today".